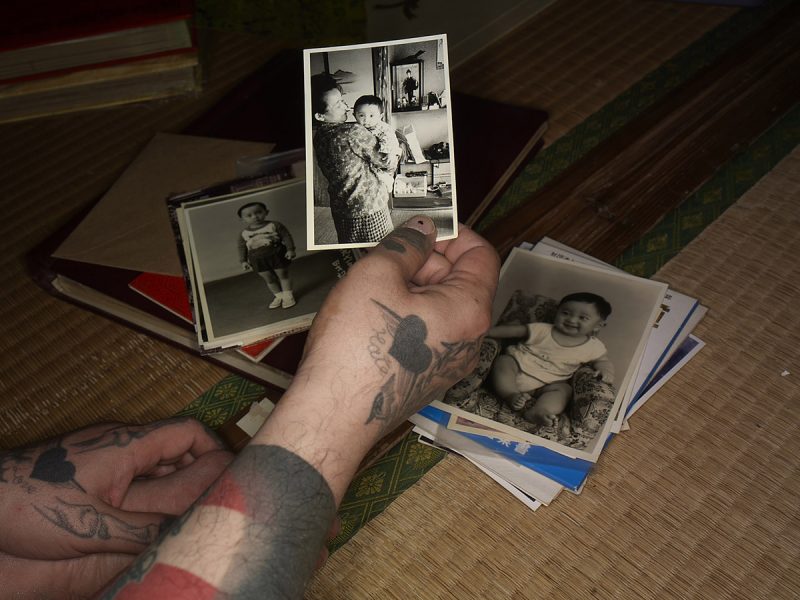 Okinawa is a tropical island of Japan and a popular tourist destination, but Ryuichi Ishikawa, born and raised here, has mixed feeling about that. Okinawa, caught between the histories of Japan and China and the economies of Japan and America, is continually manipulated by disputes between countries and the pressure exerted by them. This is an everyday occurrence in the island and the demands of daily life don’t leave to inhabitants room to turn our attention to it.

He gots to know Mitsugu on Facebook and their relationship deepened partly from having a mutual friend.

From an early age Mitsugu was sexually attracted to persons of the same gender and this made it hard for him to live in Okinawa, so when he was 20 he went to England and lived in London for 20 years in the 80s and 90s.

After that he returned to Okinawa due to the ill health of his parents and spent 10 years mostly shut up at home taking care of them.

His parents died and the father was interred in the family tomb, but the father’s first wife who had died before he met Mitsugu’s mother was also interred there, so this left Mitsugu’s mother without a tomb to be placed in. Mitsugu didn’t have any children of his own, which meant that if he had a new tomb made there would be no one to take over the care of it, so he decided to scatter his mother’s ashes at sea.

Mitsugu’s life contains stories of great significance concerning welfare and sex in society and the history and culture of Okinawa, and in it is found the conflict and universal beauty of life set against the modern society human beings have created.

Ryuichi Ishikawa (1984) is born in Okinawa, where he lives and works. He fell upon the world of photography by pure chance and started to grow interest in the media very quickly while in university. After having self-taught the craft, he studied under the photographer Tetsushi Yuzaki, and participated in the Shomei Tomatsu Digital Photography Workshop in 2011. Ishikawa was propelled to the position of a poster child of the emerging young photographers in Japan with his first mainstream publications, A Grand Polyphony and Okinawan portraits 2010-2012 both published by Akaaka Art Publishing in 2014, which earned him the prestigious Kimura Ihei Award of the same year.

He has exhibited in and out of Japan, and his recent solo exhibitions include Okinawan portraits 2012-2016, Epson Imaging Gallery epSITE, Tokyo in 2016,OUTREMER AtsukoBarouh, Tokyo, For vegetation, For land Under-Throw, Kyoto, 2017, Adrenamix PIN-UP, Okinawa, OUTREMER The Third Gallery Aya, Osaka, Zkop: a blessing in disguise Yamamoto Keiko Rochaix, London, in 2018. His recent publications include Okinawan portraits 2012-2016, Camp, in 2016, and Adrenamix in 2015.